Comprehensive is probably the best way to describe the restoration work that’s been undertaken on 80097 since its rescue from Woodham’s of Barry in 1985.  As with any Barry ‘wreck’ from that era little in terms of boiler fittings, motion and other easily removable parts had been left behind by the time the BSLCo had secured its future for the ELR.  Since arrival at Bury, there has been little left untouched in terms of restoration so far on the locomotive.

The chassis has received significant attention with virtually all components having been stripped, cleaned, de-rusted and refurbished.  Work on the wheel sets, both driving bogie and pony truck, has extended to re-profiling the tyres, re-machining the journals and then marrying them with the re-furbished axle boxes. This then enabled the frames to be reunited with the wheels. 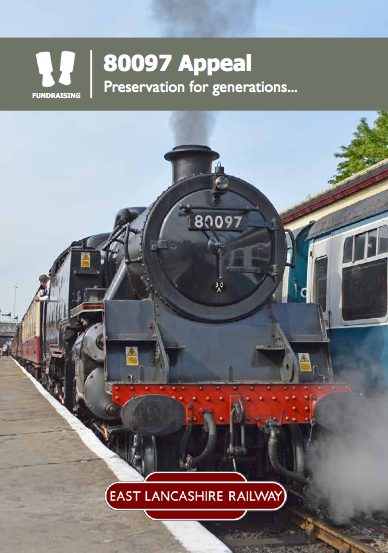 The many and varied boiler fittings and other non-ferrous items that had attracted the attention of others whilst at Barry have had to be replaced. These, in the main, have been remanufactured at significant cost and all now await re-fitting. The extensive network of lubrication pipes that feed the axle boxes, motion parts and cylinders have been replaced, and this has included some painstaking work in ensuring that the final pipe work arrangements mirror the original BR design drawings.

Replacement of those missing valve motion components, side rods and connecting rods has been a monumental exercise which has required ‘original’ parts to be tracked down and also new parts having to be manufactured. Work on refurbishment of the valves and cylinders has been equally meticulous and extensive. The side and rear water tanks/bunker have been extensively repaired and have been reunited with the loco along with a new smokebox which has been trial fitted to allow other work to proceed in anticipation of the return of the overhauled boiler.

And so we come to the main purpose of our appeal.  As is usual in long term restoration projects such as this, the boiler has been the last major component to receive attention.  Extensive work was required on the boiler barrel and firebox and whilst a lot of the minor works have been undertaken by the restoration team the more technical aspects of the repair had to be carried out by specialist contractor to ensure safe, long and reliable service from the loco.

The final piece of the jigsaw was the restoration of the boiler, needed to return the locomotive to steam the boiler restration work cost £120000,000, a loan was obtained from The East Lancashire Railway to pay for this work to be done, as it would have taken decades for The Bury Steam Locomotive Company Limited to raise that amount of cash.

The engine now has a ten year boiler certificate.

The engine is now complete and was launched into traffic on Saturday 2nd March 2019 at Bury Bolton Street Station.

We would welcome any donations which will help us pay off the loan from The East Lancashire Railway. All gifts both large and small are gratefully received .

Please click on the brochue above and print "The East Lancashire Raily 80097 Boiler Appeal" form, if you are a taxpayer your donation can be gift aided, adding an extra 25% to your gift, please print and fill in this form if you are a tax payer.

All the monies raised in "The East Lancashire Railway 80097 Boiler Appeal"  will mean that the overall monies to be repayed by The Bury Steam Locomotive Company Limited will be reduced by the amount of money that the appeal raises.