This section is about 46428’s Journey to Bury from the Strathsprey Railway up in Scotland.

Colin Wrangles heard from reliable sources that 46428 was going for a good price, we were able to call a meeting and put forward the idea of purchasing it which was duly agreed. The idea being we would have another project after the completion of 80097.

A bid was put forward which was accepted in May 1988.

Once again all we had to do was transport it to Bury from Aviemore in Scotland but lack of money was proving an obstacle. Fortunately Keith Savory found a trailer which would hold the loco. The owner had a customer in Aberdeen who was waiting to buy the trailer. A deal was done, we would take the trailer to Aviemore allowing the purchaser to inspect it so all we needed to was hire a lorry as we had a driver, Jack Atherton, who was a member.

Keith Savory, John Greenhow, Steven Buckley and Colin Randall’s all set off early one Saturday in August 1988 to arrive in Scotland in the rain to build a loading ramp.

Exhausted we tried to sleep but the rain bouncing off the roof of the carriage we were sleeping in prevented this. Loading started early on the Sunday morning and by lunchtime the Strathspey pipe band turned up to see us off but we were only half way through the job. It wasn’t until early evening that we were ready to depart and we set off to the A9 heading south. We stopped off at Beattock on the old A74 although once again little sleep was had by all but after a good hearty breakfast we were refreshed and set off arriving at Bury by 4pm. Another ramp had to be built so that 46428 could be unloaded onto the ELR. Trailer and lorry were returned and we went back to our “normal” jobs. 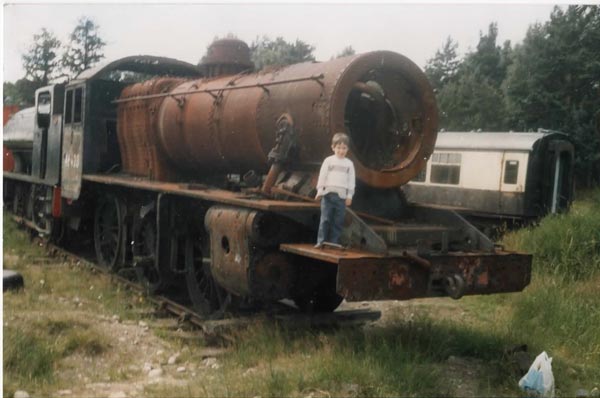 A big thank you to Keith Savory for providing the information.

If you have any information on the pictures below then please get in touch asbibby@tiscali.co.uk