While the railway was shut down for January and part of February, we took the opportunity for 80097 to have winter maintenance, which is being done by Alan, Carl, Nigel, Christian and Matt. This is scheduled to be completed by the end of March.

In the workshop the Ivatt restoration has been progressing steadily by Nigel, Dave, Stuart and Alan. They have been joined by new working members Adil, Toby and Gary.  As always Rodney has been continuing with the workshop organisation.

Stuart has fabricated and welded on the new front buffer support bracket, to which the new buffer beam will be bolted in place.

Nigel has completed the former for white metalling the pony truck axle boxes and two have now been filled. They will be machined down in the Baron Street workshop.

Work has started on fabricating a new dragbox and replacement frame stretchers have been constructed.

The Bury Standard 4 Group banner on the side of the workshop has been replaced by a new updated banner, designed and supplied by Alan. This will now inform all railway visitors passing on trains about the Group and its projects.

Keith has continued his rebuild of the L & Y coal wagon, which was moved into the engine shed at Baron Street for painting.

Keith and Peter are still working on the refurbishment of the GWR design 'toad' brake van and it is currently being repainted.

As the railway reopened in mid February, the Shop is now open on both Saturdays and Sundays.

The edging stones on platform 1 had been loosened by some heavy shunting and this had made the Shop walkway fence insecure. Derek and Harry removed and cleaned the stones before recementing them back in place. Wheel stops have been bolted onto the adjacent track in order to protect the edging stones.

We lost our Shop banner in the storms last November, which left us quite invisible to visitors to the railway. Alan, Roger, Dave, Derek, Alan and Harry removed the old posts, cemented in new ones, fitted new vertical mounting posts and installed a new updated banner, designed and supplied by Alan. Now we’re visible again.

Memberships of the Group are due for renewal at the end of March and all members will shortly receive notification of this.

Preparation of a new dragbox 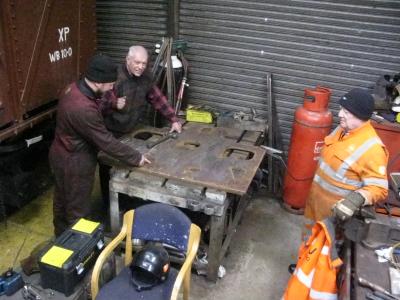 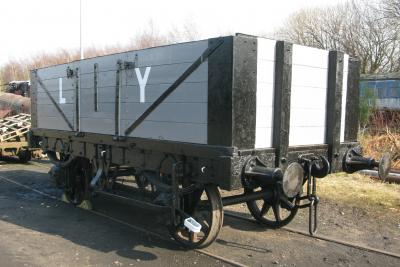