Final assembly of the loco has continued and on Monday 15th October the loco was shunted down to the East Lancs Railway’s Baron Street loco shed.

A fire was lit in the firebox and over the next three days the loco was slowly warmed through and the boiler pressure increased until on Thursday 18th October full pressure was reached.

So well, in fact, that she was a surprise guest at the ELR’s Autumn Steam Gala, which ran for three days from the 19th to the 21st October. During the gala she ran as a light engine, making many passes through the station and being stationary on the platforms, where she was visited by many supporters and guests.

Some minor commissioning work now needs to be finished off and then, following line testing, load testing and weighing, the next step will be to be classed as ‘fit to run’ by the ELR engineer’s.

We expect 80097 to be allocated to the ELR loco roster and running scheduled trains before Christmas.

80097 coming up to pressure at the ELR Baron Street yard.

Moving up to Bolton Street station to take part in the ELR Autumn Steam Gala. 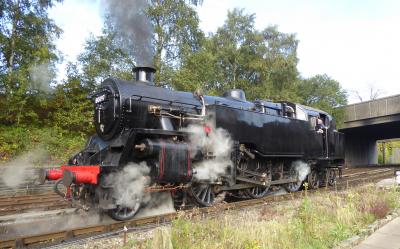