After the full line, loaded running in January, 80097 went back into our workshop for adjustments following the trials.

She was then cleaned and the final coats of paint were applied. This was followed by the decorative lining, BR decals and numbers being added.

On Friday 1st March she was taken down to the Baron Street loco shed and fired up, before a load test pulling goods wagons was successfully completed.

She was then ready for the official launch and on Saturday 2nd March was unveiled to our Supporters and the press. A Supporters reception was held at the ELR FXP centre where there were photo displays of the loco’s restoration history.

After press photos and interviews, she then broke the red ribbon and spent the rest of the day on our Supporters Celebration Special train, hauling a rake of carriages along the full ELR line.

A tv news item on Granada tv and a report on BBC Radio Lancashire followed later that evening.

This special day was enjoyed by all to celebrate the completion of the thirty four year restoration of 80097. It was also tinged with sadness as we remembered the many founder members, working members and supporters who had passed on and did not see the result of their dreams and hard work.

This completed restoration is a tribute to those founding members of 1984, all the volunteer working members over the years, our supporting Bury Standard 4 Group members, the Bury Steam Locomotive Co. Ltd. shareholders and all the donors who have helped us to achieve this. Our sincere thanks go to them all, not forgetting the East Lancashire Railway for their support over the lifetime of the project.

80097 will now join the East Lancashire Railway’s loco fleet, where her first outing will be at the Spring Steam Gala. We know she will certainly be the star of the show.

80097 arriving at Bury Bolton Street for the launch 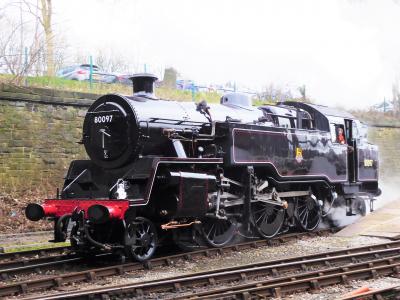