Our loco 80097 returned to service after her winter overhaul on 23rd April. After a couple of weeks running we found that the steam brake needed further attention and she was withdrawn so that this could be carried out. The problem was traced to a faulty steam brake piston ring and a new ring has been turned by Nigel from cored bar with Gary turning a new steam brake spindle bush. Thanks to the team of Matt, Alan, Chris, Carl, Bob and Nigel, overseen by our CME Allan, she will soon be back in service. Bob and Stuart are making driving wheel flange lubricators to reduce wear on the tyres when 80097 takes the tight turn to Heywood near Bury South signal box.

On the Ivatt restoration the first pony truck axle box has been white metalled and machined down by Nigel. The second box is due to be started next.

The front buffer beam has now been refabricated by Dave and Nigel and is ready for riveting on to the front of 46428. An interesting fact is that each rivet is costing us £7 – surprising where the money goes !

Stuart has been fabricating a new sanding box.

Dave has been grinding off the smokebox rivets ready for the old smoke box, which is not a pretty sight, to be removed and a boiler initial inspection to take place.

As a way to try and raise funds, the workshop team have been given some old cable and are stripping it down to release the copper core to weigh in. Continuing on the fund raising side, we are also collecting old aluminium drinks cans to weigh in and these can be dropped off at the Shop.

Keith has continued his rebuild of the L & Y coal wagon which is now complete.

Keith, Peter and Peter have continued with the reroofing of a box van. This has had the side roof strips replaced, sealed and then new canvas and edge strips fitted.

Work has continued on the bogie bolster and all the old planks have now been removed. The metal frame is being sanded down and primed and new deck planks of recovered sleepers are being fitted. This is being done by the team of David, Ian, Toby and Callum.

Supporting all this, Rodney has been organising new storage for all the tools, drills, etc. to make them more easily accessible.

Our Shop is now fully open every Saturday and Sunday (and when there are ELR special events taking place). It is also open open most Wednesdays – look for the ‘SHOP OPEN’  banner. 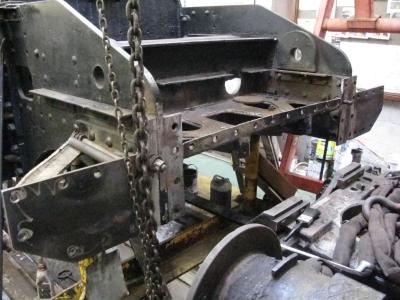