The Group continued their preparations on the axles, springs and trucks ready for the lift. On the 20th December the frame was lifted back onto the wheels at the ELR Baron Street loco shed. During the following weekend the horn ties, sanding gear, hopper door and pony truck were fitted. Coupling rods and con rods reconnected, brake rigging and brake blocks, buffers, vac bags and steam heat refitted. All done in two long days slog by our volunteers.

By the afternoon of 23rd December she was ready for a test run, which took place after the East Lancs Railway’s Santa Specials schedules had finished. A couple of steady runs on the section to Heywood and the axle boxes were running cold. A very succesful weekend.

On Saturday 29th December and another long day’s work with the last of the assemblies fitted and adjustments were made to the steam brake and other controls. Sunday 30th December saw 80097 running round the ELR Bury (Bolton Street) station and in the afternoon she completed several runs up the line to Ramsbottom. This was now going to be a very good New Year for the Bury Standard 4 Group.

Load testing will now be carried out by the East Lancs engineers and we expect to see 80097 running service trains in January.

Driving wheels and pony truck ready to be fitted under the frames.

A night return from Ramsbottom, passing 60009 Union of South Africa. 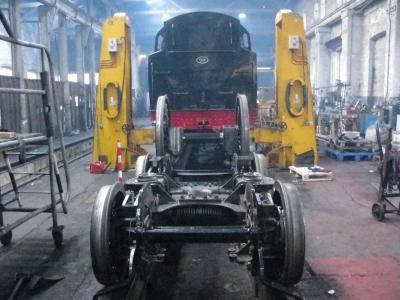 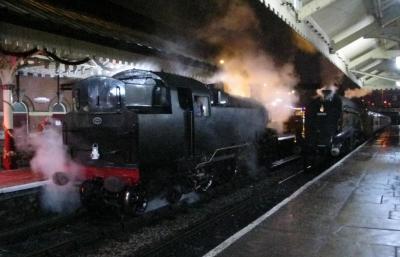