A cold water boiler exam took place on the 19th February, which she passed. Note - Even though the engine is not running, she still has to have mandatory boiler tests at fixed intervals and all these tests have to be paid for by the Group.

In common with all the ELR locos, her boiler had been drained for winter storage and in late March, work was started by Alan and Carl to prepare her for the long anticipated reopening of the railway in May. The months of storage had caused some rusting, which was cleaned off and the motion lubricated.

The 14 month boiler steam test was successfully passed on the 21st April and 80097 was the loco that reopened the East Lancs Railway on the 1st May.     A pleasure to see her running again and a credit to the small team who have maintained her over many months of inactivity.

Practically no progress has been able to be made on the Ivatt restoration due to the railway’s closure but a lot of background planning has gone on ready for when we restart work after the lockdown is eventually finished.

Hughie has been cleaning and painting the tender axle box covers at home.

Terry has measured the reclaimed parts from the cab and produced drawings, which were sent to a laser cutting company to be profiled. We have now obtained new steel side panels for the cab and a drag bar valance, all of which have been welded together. A new cab roof and its supporting bar, the main cab side and front panels have also been delivered.

During the autumn release from lockdown, the Ivatt driving wheels, which have already been machined, were put onto a low loader down Baron Street and the new steel roof for the cab was also loaded. This was then shunted and coupled up to the boiler on its low loader.  It is still planned, when the railway becomes operational again, to move the sandblasted and primed Ivatt frame into the workshop and then relocate the boiler and driving wheels from Baron Street to the track outside our workshop. This will give us all the Ivatt’s major parts in the most accessible place for further work.

We look forward to the further relaxing of covid regulations when our restoration work can continue.

The small Wagons team of Keith, Peter, John and Peter have been steadily active under the covid controlled working conditions that have been necessary during the last year. One of their major problems has been that the majority of their work has had to take place outdoors, weather permitting, as there has been no interior workspace available on the ELR.

Planet diesel shunter – which was the first diesel loco that the East Lancs Railway acquired – has had broken windows replaced, the cab tidied up and been repainted.

The ex ROF gunpowder wagon has had the ends replanked, the roof was sanded down before being over felted and tarred. The whole wagon was then repainted.

The latest project is an L & Y registered coal wagon. This was stripped down to the chassis before a new longtitudinal beam, a new buffer beam, a new centre beam and two new stay beams were fitted. This is ongoing and we are grateful to one of our Group members who personally funded the new timber that was needed. This work continues.

As our workshop closed down with the ELR closure at the first UK lockdown on 23rd  March 2020, it was only accessed for necessary maintenance and security, mostly by Carl.

Even though lockdown was relaxed on June 15th, most of our (senior) working members were still following the protective shielding guidelines and not attending the workshop. Consequently the workshop was loaned to one of our members, Nigel, to use for the refurbishment of one of his wagons. All work was carried out under the covid required guidelines.

His 1946, 55 foot long, bogie bolster ‘D’ was designed for carrying long items such as tubes, rails and signal posts. It was saved for preservation from Scunthorpe steel works, where it had been used as a billet carrier.

The extensive work has involved fitting new buffer beams, drag boxes and swivel boxes. The bogey structures, headstocks and handbrake gear have been overhauled and refitted. The stanchion mountings, support brackets and uprights have been modified and replaced. The wagon will be sanded down before priming and painting.

As previously announced, now that the railway is running trains again our Shop coach, at the end of platform 2 at Bury Bolton Street station, is open again.

We have lost practically a year of fund raising for our locos and have a lot of catching up to do.

Why don’t you come down and visit us ? 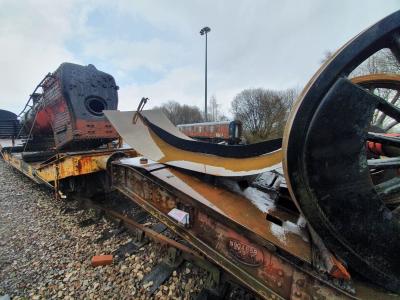